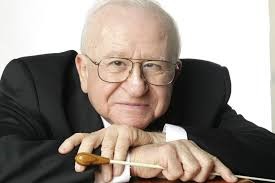 David Amos has made it his specialty as an orchestral conductor to introduce to the public lesser known works of composers worthy of greater recognition. To this end, Mr. Amos has commissioned new works as well as conducted world premiere performances in concerts and in recordings.

His musical training includes two degrees from San Diego State University, and Doctoral Studies in conducting from Indiana University. He has conducted in commercial recordings over 160 compositions on thirty five acclaimed compact discs. Only five of these works are from the familiar standard repertory. In these recordings, he conducted four London orchestras, the national and radio orchestras of Israel, Scotland, Slovakia, Russia, Lithuania, Poland, the Jerusalem Symphony, the Moravian Philharmonic, and others.

In addition to having hosted and produced a contemporary music series on radio for four years, Mr. Amos was the music columnist for the news-magazine San Diego Jewish Times for 24 years. He is in frequent demand as a lecturer, clinician, guest conductor, and adjudicator in music competitions worldwide. He is in the advisory board of XLNC1, the classical radio station of San Diego, Tijuana, and the internet, and is regularly heard on the air.

Recently, Mr. Amos conducted the Royal Scottish National Orchestra in world-premiere recordings, did the pre-concert lectures for recitals by Itzhak Perlman and Yo-Yo Ma for the La Jolla Music Society, guest conducted orchestras in Canada and Mexico, is the music columnist for the internet publication San Diego Jewish World, and is involved in future recording projects.

Virtuoso Works for Clarinet and Orchestra (2003)

Music for Two Pianos and Orchestra (2002)